You are here: Home / News / 2019 Global Temperatures in Top 5 Hottest on Record

Following today’s release of NOAA’s monthly global temperature analysis, it’s time to look back at the first half of 2019. 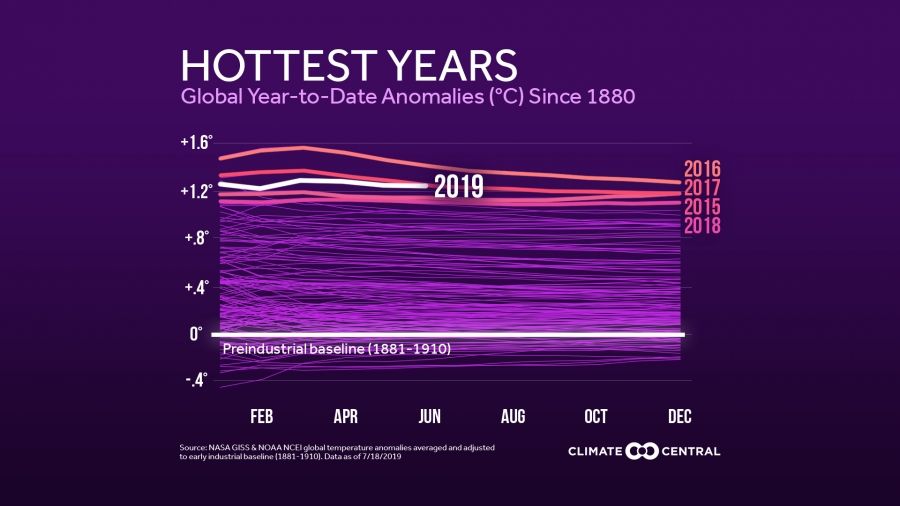 Across the world, this year has been loaded with record high temperatures. Here are a few highlights:

Human sources of greenhouse gas emissions are also at an all-time high. Those emissions add to the thickening blanket of heat-trapping gases in the atmosphere, turning recent years record-hot. Even small changes in average temperature can greatly magnify extremes. According to World Weather Attribution, climate change made Europe’s recent heatwave at least five times more likely. Such extremes will happen more frequently and intensely as the climate warms unless emissions are rapidly reduced.

METHODOLOGY: Monthly global temperature analyses are independently calculated by NASA and NOAA/NCEI. Climate Central combines the NOAA and NASA information to re-baseline global temperatures using an earlier pre-industrial baseline of 1881-1910 in response to the Paris Climate Change Agreement. NASA’s calculations are extended to account for temperature changes at the poles, where there are fewer stations. NOAA does not use any extrapolation to account for low station density at the poles.

This site uses Akismet to reduce spam. Learn how your comment data is processed.